So many people are at a loss when it comes to sidelight windows. What is the best solution for your windows? There are a lot of choices, but for many of Kempler Design’s clients, they often choose shutters. Here is the reason that this Reno client chose shutters.

They had an issue with privacy. Since there were no window treatments on the sidelight windows, if anyone were to approach the front door, they would be able to see right in. Since they already had shutters in some of the surrounding windows, adding a couple more would fit the theme. But the other functional aspect of the shutters is the ability to open the top of the shutters while leaving the bottom part closed. That way, if someone were to walk by outside, they wouldn’t be able to see inside the house. At the same time, if the homeowner wanted to look out, the shutters were designed so they would be able to see out and observe what was happening outside their front door. 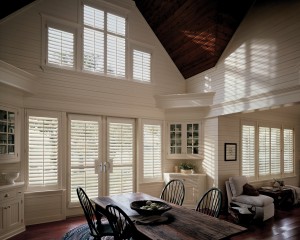 The look of Shutters

On another note, it is important to notice how the frames were chosen. Most sidelight windows are very narrow, and if the wrong frame is chosen, it can make the opening very small. By mounting the framing outside of the window, we were able to maximize the amount of light entering the entry area. To give you an idea of how much of the window we preserved, consider these facts. The size of many sidelights is about 12 inches. If we used a “Z-Frame” which inserts into the window, we would lose about 2 inches from the opening. Then we add the “stile”, which is the vertical rail that holds the louvers. These are usually about 2-2 1/2 inches wide each, so at a minimum, you’d lose 4 more inches. So, instead of having a window width of 12 inches, you’d lose a minimum of half of the window. By mounting how we did in the video, we only lost about an inch of the view and light. All of this is well thought out and implemented in the design process. It pays to hire an expert.

The CPSC Has Regulated Window Cord Safety Because of new guidelines put out by an organization that takes on the responsibility to ensure safety of children and pets, we have updates. We discuss how some of these things are going to have an impact on all of us in the future. Please watch the video […]

Uneven Ceilings are a Challenge Do you have an uneven ceiling? If you live in an older high rise condo, you probably do. This video and photos were taken in Arlington Towers Condos in Reno, NV. To begin, let me be clear about something. You can do a lot of different products for this situation, […]

If you are looking for helpful window treatment information and tips, then please call 775-857-3100, or complete our online request form.